Inquiry into Powers of Attorney

On 4 December 2008 the Legislative Assembly gave the Law Reform Committee terms of reference to conduct an Inquiry into powers of attorney. Powers of attorney are legal documents that help people plan for future financial, health and lifestyle needs. They allow a person (called a 'principal') to choose someone (a 'representative') to make decisions on his or her behalf. They are a useful way to plan for future care if a person becomes unable to make decisions for him or herself, for example because of an accident or illness.

The Committee completed its inquiry in August 2010.

The final report for the Inquiry into powers of attorney was tabled in Parliament on 31 August 2010. 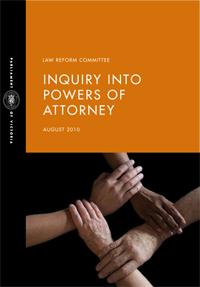 The report is now available for download as a

If you have any questions relating to the inquiry, please contact the Committee on (03) 8682 2851 or vplrc@parliament.vic.gov.au.