Skip to content
You are here: Home > About Parliament > News > Address-in-Reply presented to Governor
Listen

The Governor of Victoria has received the Address-in-Reply from both houses of the Victorian Parliament. 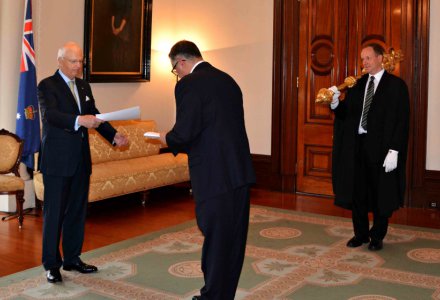 The Address-in-Reply thanks the Governor for his speech at the opening of the 58th Parliament, held on 23 December 2014. The speech outlined the government’s legislative and policy program for the new parliament.

Members from both houses spoke in response to the Governor’s speech during parliamentary debates from February to May. This included inaugural speeches from newly elected members.

The Presiding Officers were accompanied to the Government House ceremonies by a number of members and senior parliamentary officials, in accordance with parliamentary tradition.