Traditional Owners and the site of Parliament House

In 2004, the Parliament of Victoria amended the Victorian Constitution to recognise Victoria’s Aboriginal people as the original custodians of the land on which the Colony of Victoria was established.

There is an historical connection between the traditional owners of the land now occupied by the city of Melbourne and the site of Parliament House.

When the first Europeans arrived in what is now south-central Victoria, the traditional owners were a confederation of clan groups who used the collective name Kulin. The Kulin included the Watha wurrung, Taung wurrung, Woi wurrung and Boon wurrung.

The Kulin moved around their territory according to the weather and seasonal food supply and also visited sacred and ceremonial sites, such as hills and creeks, which were places with power.

In 1835, when the first Europeans arrived, the future site of Parliament House, on the hill later known as the Eastern, or Parliament, Hill, was a gum and wattle forest. This site was a traditional Kulin meeting place and favoured for inter-clan gatherings and ceremonial purposes, including corroborees. When Aboriginal clans gathered together, dancing displays welcomed visitors and celebrated special events.

There exists what appears to be an eyewitness account of a corroboree in 1836, on the site of Parliament House. The writer of the Chronicles of Early Melbourne, "Garryowen", or Edmund Finn, describes a corroboree that occurred on Parliament Hill, on 21st August, 1836, just 14 months after Batman rowed up the Yarra to the site now occupied by the central business district of Melbourne. Garryowen, who arrived in Australia in 1841, was not an eyewitness to this corroboree. His unnamed source might be the surveyor Robert Russell, whom he cites as one of his principal authorities for the events of 1836.

Garryowen’s account, stripped of the racism that was typical of the attitudes of many Europeans at the time, is as follows:

“The anniversary of the Regal Nativity [the birthday of King William IV] was 21st August, and on that day…after dark, the Aborigines had the good manners to treat the whites to a[n]…entertainment further away on the hill, where the Parliament Houses were opened just twenty years after. The blackfellows…treated their guests – for the first time performed before white men – to their great national dance, known as the “ngargee”. Semicircling a huge bonfire, they pirouetted…around the flames, which leaping up to the sky, illumined the then houseless surrounding country. “

This event draws together a number of interesting strands. It occurred very early in the history of European settlement and appears to be an eyewitness account; possibly the first time Europeans had seen a corroboree. We have a precise date and fairly precise location for the event. The location was one traditionally used for corroborees and may have been considered a special place of power. The corroboree may have been intended as a welcome to the new people and/or as a celebration of their important man. It can be argued that it was a gift or a great honour for this ceremony to have been performed in conjunction with a European celebration. 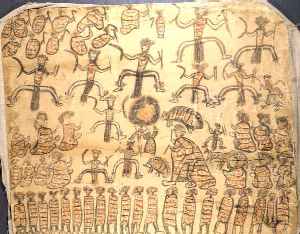 Picture of a corroboree, by William Barak, a member of the Wurundjeri-willam clan of the Woi wurrung language group.

Born in 1824, Barak may have been present at the corroboree described above.

A section was added to the Victorian Constitution by the Victorian Parliament in 2004, recognising Victoria’s Aboriginal people as the original custodians of the land.

Extract from the Constitution Act 1975, section 2:

(2) The Parliament recognises that Victoria's Aboriginal people, as the original custodians of the land on which the Colony of Victoria was established—

(a) have a unique status as the descendants of Australia's first people; and
(b) have a spiritual, social, cultural and economic relationship with their traditional lands and waters within Victoria; and
(c) have made a unique and irreplaceable contribution to the identity and well-being of Victoria.