The President is chosen by fellow Members of the Legislative Council to act as their presiding officer. It is the President's foremost responsibility to guide the House's deliberations by maintaining order and ensuring that votes and proceedings are conducted in accordance with parliamentary rules and conventions. While performing these functions, the President occupies a Chair above the floor of the House facing Members on either side of the Chamber. This elevated position reflects the President's standing as the Legislative Council's principal office-holder. The President's responsibilities also encompass ceremonial, representative and administrative functions.

Victoria's parliament, like other Federal and State legislatures in Australia, was modelled on the British or Westminster parliamentary system. Like Westminster, Victoria established two houses of parliament, an Upper (Legislative Council) and Lower (Legislative Assembly) House. However, there have always been major differences in the powers and composition of the Legislative Council and Britain's Upper House, the House of Lords, including the role and responsibilities of the respective presiding officers.

Until 2006, the House of Lords' presiding officer, the Lord Chancellor, was a senior Government Minister and therefore active in party politics. He participated in debates and votes in the House, and was not automatically provided with the power to maintain order or to act as the Lords' representative.1 This contrasted with the Speakership in Britain's Lower House, the House of Commons, which had assumed considerable power and political independence. With the passing of the Constitutional Reform Act 2005, a reformed role was created in the House of Lords, Lord Speaker, which assumed some of the Lord Chancellor responsibilities including chairing debates in the chamber and speaking for the House on ceremonial occasions. In contrast to the Lord Chancellor position, the Lord Speaker is independent of the government, is elected by the Members of the House of Lords and does not vote on proceedings in the House.

Although Presidents of Victoria's Legislative Council (and Speakers of the Legislative Assembly) are not, and have never been, as removed from party politics as British Speakers, their role continues to be influenced by the independent traditions of their Westminster counterpart.

The President must exercise a significant degree of political impartiality in order to gain the confidence and co-operation of both sides of the House. Nevertheless, Presidents are normally party members and can attend parliamentary party meetings. Unlike Speakers in the House of Commons, they do not enjoy any form of immunity from a contest when seeking re-election to their seat and, therefore, must conduct a partisan, political campaign.

The reasons why Presidents, and Australian presiding officers in general, are not as politically independent as British Speakers are complex but are thought to have much to do with the development of Australian politics and parliaments in the nineteenth century. For example, early Victorian parliamentarians were not particularly well-versed in Westminster parliamentary practice and may have been unaware of the emergence of an independent Speakership in Britain. In addition, the British Speakership's independent traditions were still in their infancy when the Parliament of Victoria first met in 1856.2

Despite the office not having adopted all of the features of the British system, Presidents of the Legislative Council have exercised considerable independence over the years. Indeed, some have put parliamentary principle before political affiliation. A prominent example was President Sir Clifden Eager, who reportedly lost party pre-selection for his seat in 1952 due to his failure the previous year to resign the Presidency and join Liberal and Country Party colleagues on the floor of the House to vote against the Greater Melbourne Council Bill. He subsequently won back his seat as an unendorsed candidate and was re-elected President after being nominated by the Labor Party.

In 1987, President Rod MacKenzie voted with the Opposition, and against Labor Party colleagues, to help defeat a Bill to reform the Upper House. Facing expulsion from the ALP, he resigned party membership and presided over the House as an independent until the following year. 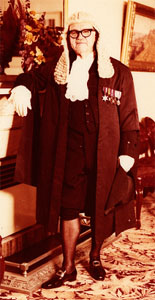 While the office of President is modelled on Westminster, in Victoria there has been a shift towards a less formal dress code. Traditionally on full ceremonial occasions the President, like the Speaker in the House of Commons, wore Windsor Court Uniform, consisting of a long coat, waist coat, knee breeches, silk stockings, ecclesiastical shoes with silver buckles, white gloves, lace jabot and ruffles, winged collar, full bottomed wig, three cornered hat, and barrister’s bib and gown. At other times, the President wore a winged collar, full bottomed wig, and barrister’s bib and gown over dark pants.

The first change to the everyday outfit occurred in the 1990s when Presidents began to wear the full bottomed wig and barrister’s bib and gown over a dark suit.

The most recent change occurred in the 2000s when the President dispensed with the full bottomed wig and barrister’s bib and gown. The first President to be attired without these symbols of office was Monica Gould.

Windsor Court Uniform is no longer worn by the President, even at ceremonial occasions. The last occasion it was worn was by the Honourable Bruce Chamberlain at the Opening of Parliament in 1999.

The election of the President is governed by the Legislative Council's Standing Orders. Under amendments to the Council’s Standing Orders which came into effect from the commencement of the 56th Parliament in 2006, a new President must be elected following each general election. Previously a new President was only elected whenever the office of President became vacant (i.e. on retirement, resignation, death or after the President's term of office as a Member has expired).

To elect a President, the Clerk calls for nominations, whereupon a Member shall address the Clerk and propose a candidate to be President. If only one Member is proposed and seconded, the Member is taken out of their place by the proposer and seconder and conducted to the President's Chair.

If more than one Member is proposed, an open vote is held. The open vote requires the Clerk to announce the name of each candidate in turn and ask Members who support the candidate to stand in their place. All Members in the Chamber must vote, but are only entitled to vote once. The candidate with the most votes is elected President.

Previously, the President was elected by division with the Clerk putting the questions to the House in the order in which nominations had been made until such time as a candidate was elected. This was uncommon amongst Australian legislatures which usually elected their presiding officers through a secret ballot.3 (A secret ballot enhances each Member's ability to vote independently of party controls). Nevertheless, contested elections have been rare in Victoria's Legislative Council — on only two occasions out of twenty one has a President's initial election to the Chair been marked by a contest (in 1988 and 2014). 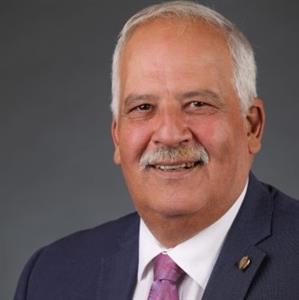 The President, the Honourable Nazih Elasmar

The Hon. Nazih Elasmar is the current President. He was elected in June 2020. Prior to his election there had been twenty-one Presidents of the Legislative Council. Thirteen of the twenty-one Presidents (62%) had Ministerial experience before assuming the Chair. In the past, the President's election has reflected the influence of rural, propertied, wealthy interests which dominated the House, particularly prior to significant reform of voter and candidature criteria in the early 1950s. Thus, virtually all Presidents until the 1970s came from a pastoralist, business or legal background and seven of the twenty Presidents (35%) have represented provinces in South-Western rural Victoria.

The first, and only woman to be elected President of Victoria's Legislative Council was Monica Gould.

The President's most important and public duties are in the Chair when acting as the House's presiding officer. Aside from the demanding tasks of maintaining order and applying or interpreting the House's rules, the President's responsibilities include:

Major sources of the President's procedural authority are the House's Standing (permanent) and Sessional (applicable to the current Session) Orders, of which there are well over 300. Many of these prescribe procedures which the President is bound to follow in particular circumstances. For instance, Standing Order 4.03(1) states that if, after summoning Members by ringing the bells, the President establishes that a quorum (one-third of the Council's Members) is not present in the Chamber, the President must adjourn the Council until the next sitting day.

There are also many Standing Orders which provide the President with considerable flexibility and opportunities to exercise discretion. When exercising discretionary power and interpreting Standing Orders, Presidents are guided by the decisions of their predecessors in the Chair whose rulings have created precedents. In cases where the Legislative Council's rules and precedents do not cover a procedural issue, Presidents are guided by parliamentary practice and conventions in the British House of Commons.

Presidents also possess informal powers to influence parliamentary processes. These powers are based on the presiding officer's capacity, as the House's principal officer, to offer procedural advice and, sometimes, to seek to initiate reform of certain practices. For example, a succession of Presidents have been staunch defenders of the Upper House's rights and advocates of further development of the committee system. Former President, Bruce Chamberlain, successfully urged for the introduction of a public right of reply (to be published in Hansard) for members of the public who believe they have been defamed in Parliament.

Prior to amendments to the Constitution (Parliamentary Reform) Act 2003, which came into effect from the commencement of the 56th Parliament, the President only voted in a Division if the number of votes on the question before the House was equal, at which time the President exercised a casting vote. The Presiding Officer no longer holds a casting vote but exercises a normal deliberative vote like other Members of the Legislative Council. This means that the Presiding Officer must vote each time a division is called; however, to cast their vote they need only advise the Council whether they are voting with the “Ayes” or the “Noes” and do not have to move to one side of the Chamber.

The President fulfils a representational role on several levels. Not only is the President the Legislative Council's representative but, depending on the circumstances, s/he may also represent the interests of the State of Victoria and the Commonwealth of Australia. This occurs via many official contacts with overseas visitors, including members of parliamentary delegations, diplomats, ambassadors and high commissioners. In addition, the President attends conferences overseas, including those of the Commonwealth Parliamentary Association and regional meetings of presiding officers and clerks. It is not unusual in this situation for the President to be briefed beforehand by the Department of Foreign Affairs and Trade in order that matters of trade and investment can be raised alongside an exchange of views on parliamentary affairs. Such activities can be some of the more satisfying aspects of a presiding officer's activities.

In performing these duties, the President receives advice from officers of the Parliament, particularly the Clerk of the Legislative Council who, as Departmental Head, has overall responsibility for the Council's financing, staffing and administration.

PRESIDENTS OF THE LEGISLATIVE COUNCIL

Prepared by: Table Office
Department of the Legislative Council
Parliament of Victoria