What is a Bill and what does it contain?

A Bill is a proposed law presented in the form of a draft Act of Parliament. Most Bills introduced into the Victorian Parliament consist of the following:
a.  an explanatory memorandum attached to the front of the Bill that briefly outlines the provisions contained within the main body of the Bill;
b.  a long title describing the Bill's main purpose(s);
c.  a short title – for example, the Unclaimed Money Bill 2008;
d.  enacting words – a short statement identifying the authority by which the proposed law is to be made. In Victoria, Bills state that 'The Parliament of Victoria enacts:'; and
e.  the main body of the Bill containing its various provisions which are divided into clauses and sub-clauses. 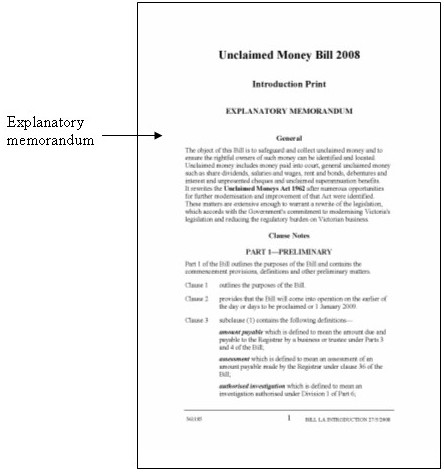 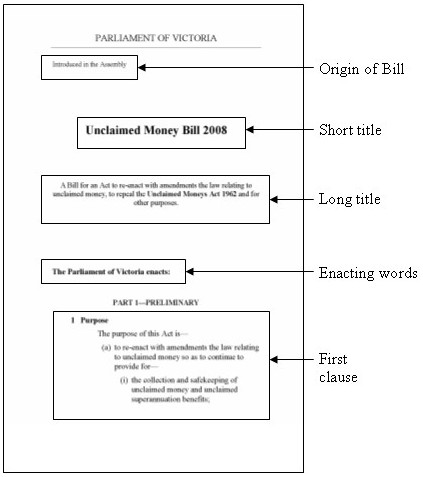 On occasions appendices, referred to as Schedules, are included in Bills. These contain information which cannot easily be included in the form of clauses.

Although inserted infrequently in recent years, Bills can also contain a preamble, which is placed between the short title and the enacting words and outlines the proposed legislation's scope and objectives.

What types of Bills are there?

Bills in Parliament can be divided into two broad groups: Government Bills and Private Members’ Bills.

Private Members’ Bills should not be confused with Private Bills. Private Bills are Bills affecting the rights and interests of individual persons or corporate bodies, and do not affect the wider public. This is in contrast to Public Bills, which can have implications for a majority of Victoria’s residents. Private Bills are generally sponsored by the individual or body affected by the Bill.

What are the usual steps in drafting Public Bills?

Bills emanate from the ideas, commitments and policies of political parties, individual parliamentarians and others, including the public service, industry associations, trade unions and pressure groups. These proposals for reform normally begin as general statements and principles which need to be developed into detailed clauses if they are to become Acts of Parliament. In the case of Bills initiated by the Government (and most Private Members' Bills), it is the Office of Parliamentary Counsel's role to undertake this form of detailed drafting.

Once a draft version of a Bill has been formulated, it is normally circulated to interested parties for comment which will often lead to further redrafting by Parliamentary Counsel. In the case of Government Bills, the approval of Cabinet (which previously will have given in principle approval to the draft legislation) and the parliamentary party is required before the Bill is introduced into Parliament.

Passage of a Bill through the Legislative Council

In the case of Bills introduced into Parliament in the Legislative Council, the Minister (or the Member responsible in the case of Private Members' Bills) usually gives notice of intention to bring in the Bill on the next day of meeting. However, on occasions, such Bills are brought in, by leave (with the House's permission), without notice.

The second reading stage is where the broad principles underlying the Bill are considered by the House. In moving that the Bill be read a second time, the Minister or Member in charge of it gives a speech outlining the major proposals contained within the Bill.

A Bill introduced into Parliament through the Legislative Council remains confidential and is not a public document until the second reading speech has been delivered. This does not apply if the Bill has already been dealt with by the Legislative Assembly.

At the conclusion of the second reading speech, if the Bill has been initiated in the Legislative Council, debate is normally adjourned for two weeks to allow all Members sufficient time to digest and analyse the Bill's provisions. (It also allows the Parliament's Scrutiny of Acts and Regulations Committee sufficient time to analyse the Bill and formally report to Parliament). If, however, the Bill has previously passed through the Legislative Assembly, debate is usually adjourned for one week.

When debate resumes on the second reading, it is wide ranging and can include issues such as alternatives to the proposals contained in the Bill. Members may speak only once on the second reading and are not, under the current Sessional Orders, constrained by time limits.

If a Bill passes the second reading stage, and the House wishes to consider the Bill's contents in detail, the Bill can proceed to:

These stages can be waived with the House's unanimous consent, which often occurs in relation to minor or non-contentious legislation. For example, of 368 bills dealt with by the Legislative Council during the 56th Parliament, only 151 (41%) proceeded to Committee of the Whole stage.

This stage is usually a formality and rarely includes further debate. If debate does occur, it is restricted to the Bill's contents. If the third reading is agreed to, the Bill is passed and sent to the non-initiating House seeking its concurrence.

A Bill must then pass the same stages in the other House before it can become law. If the other House amends the Bill, it is referred back to the initiating House for further consideration. All formal communication between the Houses concerning a Bill's passage is through a document known as a 'Message' which is signed by the Presiding Officer of the House (the President in the Legislative Council and Speaker in the Legislative Assembly). The Message accompanies the Bill and is delivered by one of the Table Officers (usually the Usher of the Black Rod or the Serjeant-at-Arms).

If agreement is reached between the Legislative Council and Legislative Assembly, the Bill becomes an Act of Parliament after receiving Royal Assent from the Governor of Victoria. The Act becomes law and comes into operation:

Section 28 of the Charter of Human Rights and Responsibilities Act 2006 states that all Bills introduced into Parliament are required to be accompanied by a statement of compatibility. The statement must be tabled in each House before the second reading speech is given.

Statements of compatibility are used to inform Members of Parliament whether a Bill is likely to infringe upon human rights listed in the Charter. The statement is also examined by the Scrutiny of Acts and Regulations Committee as part of their consideration of the Bill. Statements of compatibility are not legal documents however and are not binding on any court or tribunal.

How does the Legislative Council deal with Private Bills?

Unless the Council determines that fees should be waived, the individual or body sponsoring the Bill is then required to pay a deposit the amount of which is determined by the President. In addition, the sponsor must meet all costs of the Bill's printing and circulation and other expenses related to the Bill's passage. When the sponsors of Private Bills are charitable institutions, it is usual to exempt them from incurring costs.

In all other respects, the Legislative Council deals with Private Bills in the same way as Public Bills.

What is special about Appropriation Bills?

Appropriation Bills concern government appropriation, expenditure or taxation. These are the Bills that provide the Executive with the financial means to govern. In the past, Victoria’s Constitution allowed the Legislative Council to accept or reject such Bills but prevented it from initiating or amending them. In having the power to reject Appropriation Bills, the Legislative Council had the means to block supply to the Government.

This has changed through reforms introduced under the Constitution (Parliamentary Reform) Act 2003, which have removed the Council’s ability to block supply. The Council can still debate and consider Appropriation Bills but, if within a month of such a Bill passing the Assembly, the Council rejects or fails to pass it, or returns the Bill to the Assembly with a Message suggesting an amendment to which the Assembly disagrees, the Bill will automatically be presented to the Governor for Royal Assent.

What happens if a non-Appropriation Bill is rejected?

If a Bill that is rejected during its passage through either House (this will almost invariably occur at the conclusion of the second reading debate) has failed to become law. Under changes introduced by the Constitutional (Parliamentary Reform) Act 2003, a non-Appropriation Bill that is passed by the Legislative Assembly but fails to pass the Legislative Council is now referred to as a Disputed Bill and can undergo a formal process to try to solve the impasse.

Once it becomes a Disputed Bill, the Bill can be referred to the Dispute Resolution Committee. This Committee is convened following each Victorian general election. The Committee, consisting of seven Members of the Legislative Assembly and five Members of the Legislative Council, has been designed to resolve differences between the two Houses regarding Disputed Bills. The Committee has several options: it may decide that the Bill will pass without change, pass with amendments, or not pass at all. Whatever its decision, it must be made within 30 days of the Committee receiving the Disputed Bill.

From this point forward, the life of the Disputed Bill has two alternative paths. If the Committee reaches an agreed resolution, that is also accepted by both the Legislative Assembly and the Legislative Council, the Bill will pass through both Houses and become law. However, if the Committee is unable to agree on an outcome for the Disputed Bill, or if the Committee’s resolution is rejected by either House of Parliament, the Bill becomes known as a Deadlocked Bill.

A Deadlocked Bill can be dealt with in two ways:

If the Council does not pass the Deadlocked Bill within two months of it being passed by the Legislative Assembly, the Governor can, on the Premier’s advice, call for a joint sitting of both Houses of Parliament to consider the Bill, where it must be passed by a majority of the total number of Members from both Houses to become law.

What is special about Bills that alter Victoria’s Constitution Act?

Prior to the Constitution (Parliamentary Reform) Act 2003 Parliament was able to alter the Victorian Constitution by an Act of Parliament, either passed by an absolute majority of members in each House or a simple majority, depending on the section being amended.

Core provisions that can only be changed through a referendum are:

The third method of altering the Constitution is by an absolute majority. Areas that require such a majority are: