What are Divisions and in what circumstances do they occur?

All questions before the House are determined by a majority of votes. Most questions are decided simply on the voices; however, there are occasions when a Division is called. A Division is a formal count of Members for and against a question before the House. It involves Members positioning themselves on one side of the House or the other for the purposes of the count. In most cases, a Division follows debate on a Bill or motion and occurs when one or more Members challenges the Chair's (presiding officer’s) determination of the question which has been made on the basis of the strength of Members’ voices

How are Divisions conducted?

The Division process begins when debate concludes and the Chair puts the question and asks those in support of it to say ‘Aye’ and those against to say ‘No’. Normally, the Chair calls the result on the strength of the voices: after asking the question, the Chair announces whether, in his/her opinion, ‘the Ayes (or Noes) have it’. If this call is disputed by any Member, the Chair asks, ‘Is a Division required?’ If it is, the Chair instructs the Clerk to ‘ring the bells’. The bells ring throughout Parliament House and its environs for four minutes so that any Members who are not in the Chamber when a Division is called are aware that a vote is about to occur. After four minutes, the Chair orders that the doors be locked. From this point, no Member may enter or leave the Chamber until the Division has been completed and the result announced by the Chair.

Once the doors have been locked, the Chair repeats the question. Members voting in the affirmative sit to the Chair’s right, while those voting against sit on the left. The Chair appoints four Members (known as ‘Tellers’), two for the ‘Ayes’ and two for the ‘Noes’, who are responsible for recording Members’ names. A Teller from both the ‘Ayes’ and ‘Noes’ then swaps sides while the count is conducted.
Until April 2006, it was the Legislative Council’s practice for the Teller for the opposing side to call out each Member’s name, while the other Teller ticked the names on the Division List. After the numbers had been checked, the Teller who joined the opposing side reported the number to the other side and the Division Lists were signed by each Teller to authenticate the record. However, a new practice has been adopted to reduce the House’s time spent on Divisions. The Clerks now conduct an initial count of Members and tick the Division Lists, prior to the appointed Tellers verifying the numbers and signing the Lists. The Clerk then gives one of the Division Lists to the Chair who reads out the result to the House.

Occasionally, successive Divisions occur. When there is no intervening debate after the first Division (usually a vote on the second and third readings of a Bill), the bells for the ensuing Division are rung for one minute and the one minute Sand Glass is turned over. This is the only difference from the conduct of a normal Division.

What are Division Lists?

The Division List is the form on which votes are recorded during a Division.

It was previously the Legislative Council’s practice for Members’ names to be listed alphabetically on each Division List, rather than grouped according to party affiliation. Effective from 6 April 2006, the Division Lists were rearranged with each Member’s name appearing alphabetically within a party list. This changed format allowed for a quicker and more accurate method of votes being recorded by the Clerks as part of the new approach to conducting Divisions. 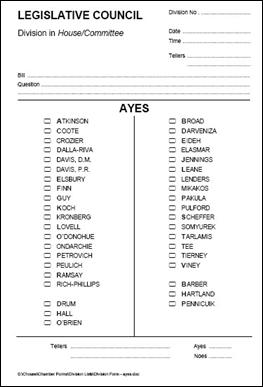 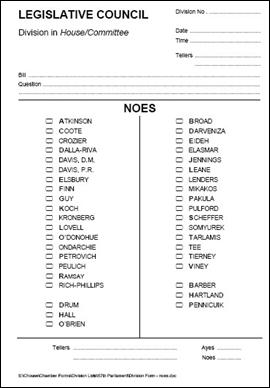 Can a single Member call for a Division?

In the Legislative Council, if only one Member calls for a Division, the vote still takes place. Under the Standing Orders, if there is only one Member who has opposed the question when the Chamber doors are locked, the Member may request that the Division proceed in the normal manner or instead request that his or her dissent be recorded in the Minutes of the Proceedings. If a Division is required, the President will direct an officer at the Table to act as second teller for the minority.

How do Members vote?

The majority of decisions made by the Victorian Parliament are determined along party lines. There are rare exceptions to this; occasionally party leaders allow their fellow parliamentary Members a ‘free’ vote. This may be permitted when the party does not have a firm policy on a matter or when it is felt that a particular issue makes it appropriate for Members to exercise their responsibility to constituents through a conscience vote. For example, in the Autumn Session of 2001, Liberal Party Members of the Victorian Parliament were permitted a free vote on the Statute Law Amendment (Relationships) Bill and in July of 2008 Members of all parties were allowed a free vote on the Abortion Law Reform Bill 2008.

Amendments to the Constitution (Parliamentary Reform) Act 2003, which came into effect from the commencement of the 56th Parliament, significantly altered the President’s role in and during Divisions. Prior to these reforms taking effect, the President did not vote in Divisions. However, if the number of votes on the question before the House was equal, the presiding officer exercised a casting vote and it was at their discretion as to whether they gave their reasons for the way they voted. The President no longer holds a casting vote but exercises a normal deliberative vote like other Members of the Legislative Council. The President must vote each time a Division is called; however, to cast their vote they need only advise the Council whether they are voting with the “Ayes” or the “Noes” and do not have to move to one side of the Chamber.

Another practice which has some impact on the way Divisions are conducted, is the ‘pairs system’. This is an unofficial arrangement between Members, which facilitates a Member on one side being absent from the vote, or abstaining from voting, when a Member from the other side is absent. This system maintains the relative voting strengths between the parties. The party Whips negotiate these arrangements. 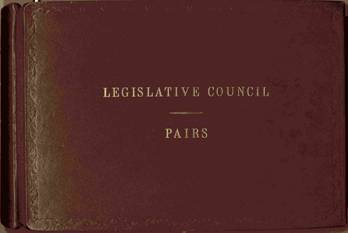 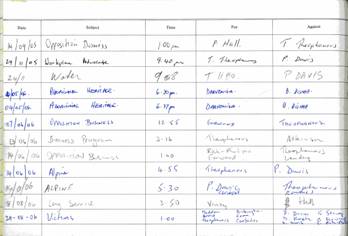 What are Divisions in Committee?

Divisions can also take place during the Committee of the whole, which is an optional stage in the progress of a Bill. The Committee of the whole can be formed after a Bill’s second reading when amendments are to be moved or detailed discussion on clauses of the Bill is required. Divisions during the Committee of the whole are carried out in the same manner as ordinary Divisions, with the exception that the Deputy President takes the Chair rather than the President. In addition, the Division Lists are not entered in the course of the Minutes of the Proceedings, but in supplements attached to the weekly version of Minutes of the Proceedings. Like the President, when the Deputy President is in the Chair he has a deliberative vote but not a casting vote.

Occasionally an error may occur during the first count of all Members. If such an error is identified immediately after the Division, the Council Standing Orders state that the House shall proceed to a second Division.

If an error is identified at a later stage, after the numbers have already been reported to the Legislative Council, Standing Orders allow the formal record to be corrected after the presiding officer informs the House of the mistake.

Can Members raise a point of order during Divisions?

It is possible for Members to raise a point of order while dividing, although a Member wishing to do so must be given permission to speak by the Chair. Tradition used to have it that when a Member gained such permission, they needed to make a gesture indicating that they were ‘covered.’ This dates back to when hats were expected attire in the Chamber. When Members rose to speak, they had to remove their hat: this was called ‘speaking uncovered’. During a Division, a Member wishing to raise a point of order kept his hat on to avoid the appearance of participation in debate.

Until recently Hansard would refer to a Member raising a point of order in a Division as ‘speaking covered’. In addition, the Member would also make some attempt to cover his/her head, even if just by holding up a piece of paper.

The procedures relating to speaking with and without hats originated in the United Kingdom’s Parliament, where the requirement of hat wearing during Divisions was not modified until 1998. Until that time, top hats were kept in the House of Commons for Members wishing to raise a point of order during a Division.

History – where did the practice come from?

The practice of voting by dividing is based on British precedent. Records indicate that, as far back as 1584, when a question was put to the House of Commons, the Speaker always assessed the House’s view on the strength of the voices and, if this assessment was challenged, a formal count occurred. However, the Victorian Parliament differs from the British approach in the method of counting the vote. In Victoria, the Members sit on the Chamber benches while votes are tallied. In Britain, the House of Commons’ Chamber has special ‘voting lobbies’ where Members assemble to have their votes recorded. Those voting ‘Aye’ walk into a Division lobby to the right of the Speaker and those voting ‘No’ into a lobby to the Speaker’s left. Three desks in each lobby are used by the Clerks who tick the Members’ names off the Division Lists as they pass through. When Members file out through the exit doors, two Members, acting as Tellers, count them again.

Number of Divisions in the Legislative Council

The following table gives some indication of the number of Divisions that can occur in the Legislative Council. This number will always vary in accordance with factors such as the nature and amount of legislation being discussed and the number of sitting days:

Prepared by: Table Office
Department of the Legislative Council
Parliament of Victoria
Reissued May 2011