The significance of regional sittings

he Victorian Parliament created history when both Houses sat outside of Melbourne on 16 August 2001. When the Legislative Council sat in Ballarat and the Legislative Assembly in Bendigo, not only were these the Victorian Parliament’s first sittings outside of Melbourne in what was then its 145 year history, these were the first meetings of any Australasian legislature outside of a capital city. In the case of the Legislative Council, the success of its Ballarat sitting prompted subsequent regional sittings on 30 October 2002 at the Benalla Town Hall, on 17 November 2005 at Colac, on 15 and 16 October 2008 at Lakes Entrance and on 6 September 2012 at Bendigo Town Hall.

Regional sittings aim to replicate a typical sitting day in Melbourne, so facilities and services approximating those provided in Parliament House are established.  These include temporary offices, a library area, party rooms, Hansard and President’s office.

Each day is conducted in a similar fashion to sitting days in Melbourne, beginning with the Clerk reading the Governor’s proclamation at the commencement of the sitting. Proceedings normally include Members’ Statements, General Business, Government Business, Question Time and an Adjournment debate.

One of the main purposes of regional sittings is to bring Parliament to the people. Therefore public involvement in the day is essential.

Souvenir booklets of the event, focussing on the Victorian Parliament and its links with each venue, are distributed on the day along with other parliamentary related material. Several articles highlighting the event are published in the local newspapers prior to each regional sitting, posters advertising the day are displayed around the host town, and flyers are distributed, all aimed at both informing the public and increasing awareness and interest in the day.

On the day, members of the public can sit in the public viewing gallery and observe proceedings. At past regional sittings, direct coverage of proceedings  has also been telecast in waiting areas, ensuring that those outside the Chamber can follow what is occurring and see as much of the day as possible. As of October 2008, the audio of Council proceedings, both in Melbourne and at regional sittings has been available via the internet also.

The year 2001 was one of celebrations, highlighted by Australia’s Centenary of Federation. For Victoria, it was also the 100th anniversary of the Victorian Parliament’s first sitting as a State Parliament, rather than as a colonial legislature. As a means of celebrating these events, the Legislative Assembly decided to hold a centenary sitting in Bendigo. The former Premier, Steve Bracks, announced the planned regional sitting to the Assembly on 26 October 2000, stating that it would be a means of recognising 'the crucial role that regional Victoria played in the history of Victoria, the nation and the formation of the Federation'.

Given that the Victorian Parliament had been bicameral since the establishment of responsible government in 1856, the Legislative Council believed it was important for both Houses to conduct a regional sitting. In the process, the Council intended to show some of the differences between its role and procedures and those of the Assembly. 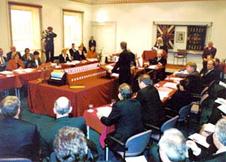 Ballarat was considered an appropriate location to host the Council’s first regional sitting for several reasons. One of its principal advantages was size, as Ballarat is the third largest urban centre in the State. A centre of this size had the capacity to provide the infrastructure and support required for a regional sitting, as well as having a large enough population base to attract sufficient public interest. Ballarat’s proximity to Melbourne was also an advantage, being only 110 kilometres away. This made planning and organisation of the event easier. The efficient planning of the event was further enhanced by the support and enthusiasm of staff from the City of Ballarat.

Historical considerations were also taken into account when selecting Ballarat. The Victorian Parliament and Ballarat share a long and well-established history, with numerous events and individuals having linked the town with the institution. This relationship was celebrated and further strengthened with Ballarat hosting the regional sitting.

The timing of the regional sitting coincided with the 150th anniversary of the discovery of gold in the Ballarat region. The development of Victoria’s Parliament House, along with the State in general, owes much to the wealth generated by the gold rush in which the Ballarat diggings figured so prominently. The significance of this connection was highlighted during the lead-up to the sitting by then President of the Legislative Council, the Honourable Bruce Chamberlain:

It is very appropriate that the region of Ballarat, the place that sparked a new era in the development of Victoria, should be where this next exciting development, bringing parliament to meet the citizens, takes place. 1 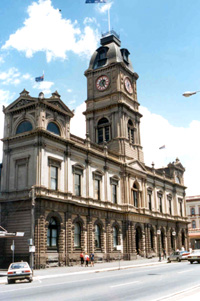 Significant Members of Parliament, both State and Federal, have represented the Ballarat region or had close links with the area in other ways. Amongst these were Thomas Hollway, who was Premier of Victoria between 1947 and 1950 (and briefly again in October 1952) while representing Ballarat District in the Lower House; long serving Premier Sir Henry Bolte (Premier from 1955-1972), who was born and raised in Ballarat; Alfred Deakin who was Prime Minister on three occasions from 1901 to 1913 while representing Ballarat; and the former Victorian Premier, Steve Bracks, who was born and educated in Ballarat.

A large proportion of the matters raised and debated on the day related to rural and regional Victoria. For instance, one of the first motions moved on the day, as part of General Business, concerned the importance of ‘a vibrant and buoyant rural and regional Victoria’ to the State’s growth and the role of government policies in achieving this. Question Time had a similar focus, with a number of questions specifically related to the Ballarat region.

The success of the Ballarat sitting encouraged the Legislative Council to conduct another regional sitting. On this occasion, the Council wanted to show that regional sittings could be held in diverse locations, not just large regional centres. Therefore, a town considerably smaller than Ballarat was chosen. Benalla, which is approximately 220 kilometres north-east of Melbourne, was suitable for such an occasion, as it was a small community with a population of approximately 9,000, but still able to provide the infrastructure required to stage the event.

Benalla boasted an impressive Town Hall, built in 1883 and extensively renovated shortly before the sitting. The Town Hall easily adapted to the demands of a parliamentary sitting. Similar services and facilities to those in Ballarat were established in Benalla.

Like Ballarat, there were important links between the location and the Victorian political scene. For example, since the establishment of responsible government in Victoria in 1856, ten Legislative Council and five Legislative Assembly Members had become Government Ministers whilst representing Benalla and the surrounding district. Another notable feature of Benalla’s representation in the Victorian Parliament was its Members’ political longevity with many having served long periods as parliamentarians.

The sitting in Benalla ran as closely as possible to a typical sitting day of the Legislative Council in Melbourne. Like Ballarat, the proceedings of the day included Question Time, General Business, Government Business and an Adjournment Debate.

The Legislative Council's third regional sitting was held in Colac on Thursday 17 November 2005. The Legislative Assembly sat on the same day in Geelong. Colac is approximately 150km west of Melbourne, and the region has made a significant contribution to both the Legislative Council and to Victorian politics, with 3 Council Presidents, 4 former Council Members, 1 Assembly Member and 1 of Victoria’s Governors, the Hon. Richard McGarvie A.C., Q.C., coming from Colac.

The sitting took place at the Colac Otway Performing Arts and Cultural Centre. (COPACC), and drew on the experience gained from the previous two sittings outside of Melbourne.

It is estimated that over 500 local school children, and over 1500 members of the general public observed the Council’s proceedings during the day.

In addition, the local council organised the ‘Living in Harmony’ festival to coincide with the sitting of the Legislative Council.  This was held outside the venue and provided another focus for visitors on the day.

The fourth regional sitting of the Legislative Council took place over two days in Lakes Entrance on 15 and 16 October 2008. Lakes Entrance lies approximately 320km east of Melbourne in the Gippsland region, and has a population of just over 4000, making it the smallest community to date to host the Legislative Council. On 15 October 2008, the Assembly also held a one day regional sitting at Churchill, also in the Gippsland region. 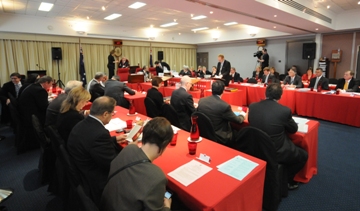 The Legislative Council in Session in the Bellevue on the Lakes Conference Centre, Lakes Entrance

Premier John Brumby selected the Gippsland region as an appropriate venue for both the Assembly and Council sittings, noting that the region had been doing it tough following recent bushfires and floods, therefore the regional sitting would give Members of Parliament an opportunity to witness first-hand the results of the Government’s multi-million dollar recovery package.2

The sitting was held at the Bellevue on the Lakes facility, a conference centre located on the main esplanade running through Lakes Entrance. This location allowed the people of Lakes Entrance and the wider Gippsland region to experience parliamentary democracy first hand, with members of the public and numerous school groups all attending.

The most recent regional sitting was held in Bendigo in 2012. The day saw the Prayer read by the Very Reverend John Roundhill, Anglican Dean of Bendigo, followed by the Clerk reading the Proclamation setting the meeting time and place.

Councillor Alec Sandner, Mayber of the City of Greater Bendigo addressed the House before the Council undertook its regular business for a sitting day, including Formal Business, Question Time, consideration of Government motions and debate on the second reading of a Bill.

It was not long after Victoria’s first regional sittings that other Australian legislatures followed suit. The Queensland Parliament sat in Townsville from 3 to 5 September 2002 at the Townsville Entertainment and Convention Centre, making history by being the first Australian Parliament to hold a normal sitting week in a regional centre. Queensland subsequently held a second regional sitting at Rockhampton from 4 to 6 September 2005.

The Northern Territory also took Parliament to the people, sitting in Alice Springs from 29 April to 1 May 2003 to recognise 25 years of self government.

To celebrate the 175th anniversary of the proclamation of the Swan River colony and the State Parliament Building’s centenary, the Western Australian Legislative Assembly staged a regional sitting in Albany on Tuesday, 23 March and Wednesday, 24 March 2004. Albany was Western Australia's first European settlement, first established in 1826.

The Tasmanian Parliament held its first regional sitting from 17 to 19 October 2006 in Launceston to mark the Parliament’s 150th anniversary, and the bicentenary of Launceston’s foundation.

Prepared by: Table Office
Department of the Legislative Council
Parliament of Victoria
July 2009