Other changes included in the reform package, but not directly related to changes to the electoral system, included recognition of the principle of a government mandate, the entrenchment of certain legislative provisions, removing the ability of the Legislative Council to block Supply (annual appropriation) Bills and the establishment of a dispute resolution process for deadlocked Bills.

This information sheet examines the changes to the Legislative Council's electoral system contained within the Constitution (Parliamentary Reform) Act 2003.

Proportional representation is not the name of a single electoral system – there are several different versions of proportional representation. In Australia, the predominant version is the Single Transferable Vote (STV) method (also known as the quota-preferential system). This is the system that is now used for Victoria's Legislative Council. The method operates in multi-member electorates and has been designed to ensure that as many votes as possible are used to elect candidates, rather than excessive votes becoming wasted surplus votes. This is achieved by transferring elected candidates' excess votes (votes that would otherwise be wasted once they have obtained sufficient votes to be elected) to continuing candidates, in the voters' order of preference, until all vacancies are filled. Candidates are elected by obtaining a pre-determined proportion, or quota, of the total votes. This quota is calculated by dividing the total number of valid votes by one more than the number of seats to be filled and then adding one vote.

The quota is the number of votes a candidate needs to be certain of election, and is calculated using the formula:

For example, if there were a total of 10,000 formal votes and four candidates to be elected, the quota would be:

The quota used for all STV systems in Australia is called the ‘Droop' formula first published in 1868 by mathematician and lawyer, Henry R. Droop.

* Note - neither independent in the 55th Parliament was elected as an independent; both were elected as members of either the Australian Labor or Liberal Parties. 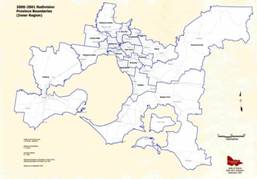 Another key electoral reform contained in the Constitution (Parliamentary Reform) Act 2003 involved changes to the ballot paper arising from the introduction of an optional preferential voting system. The ballot paper now allows candidates to be grouped together under a party or group ticket. (See example above.)

Amongst the reforms contained in the 2003 Act was a change that saw voters given the option of voting ‘above or below the line'. Voters simply either placed the number 1 in the box next to the group or party name for which they wished to vote, or the voter filled in below the line on the ballot paper in order to vote for multiple candidates that are listed on the page. In the latter case, the voter was required to mark their vote by placing numbers, in order of preference, next to the names of at least five candidates.

4. Fixed dates and fixed terms for the Victorian Parliament

From 2006, elections for both Houses of the Victorian Parliament now occur every four years on the last Saturday in November. All Members of the Legislative Council and Legislative Assembly will face election on that day.
As a result of this change, the Premier will no longer be able to nominate the date of an election. The fixed four year parliamentary term can only be varied if one of the following three circumstances occur:

The changes described above mean that, in effect, the parliamentary terms of Council Members have been reduced from the equivalent of two Assembly terms to a set four year term – in line with their Assembly counterparts.

Another important reform to Victoria's electoral system relates to the filling of seats that become vacant in the Legislative Council outside an election period. Such a circumstance may occur if a Member decides to retire or if they die during their term in Parliament.

If a vacancy arises a joint sitting of Parliament is required to select a new Member to fill the vacancy. As is the case in the Australian Senate, if the vacating Member was elected as a member of a political party, the joint sitting must select a person nominated by that political party.

If the Member was an independent, the joint sitting is required to select a new Member that has not been a member of a political party for five years and has lived for twelve months in the region that is being vacated. In order for the independent Member to gain selection they must obtain three fifths of the support of all Members voting at the joint sitting.
The only time a joint sitting need not be held is if the vacancy occurs within three months before the seat would have become vacant due to the expiry of the Legislative Assembly.