The Legislative Council's electoral system, which had existed for over one hundred and fifty years, was substantially reformed by the Constitution (Parliamentary Reform) Act 2003 enacted in March of that year.

These electoral reforms, which significantly altered the Council's composition, represented the culmination of a very slow process of change which commenced in 1851 when Victoria's first Legislative Council was established. 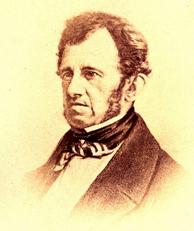 The region now known as Victoria was part of New South Wales until formal separation in 1851. The Act that established this separation also provided for a limited form of representative self-government in the new colony. This was facilitated by the establishment of a Legislative Council (but not a Legislative Assembly) consisting of thirty Members, with twenty elected and the remainder appointed by the Lieutenant-Governor (who was a British appointee). This Legislative Council governed Victoria between 1851 and 1856.

The writs for Victoria's first Legislative Council election were issued on 1 July 1851, with the election being held between 11 and 18 September of that year. The voting system used was ‘first past the post' (i.e. voters could cast only one preference and the candidate with the most votes was elected). Voting was not compulsory, nor was it secret.

Of the twenty elected Members of the Legislative Council that first met at St Patrick's Hall Melbourne on 11 November 1851, only seven represented Victoria's most populous regions of Melbourne and Geelong. Melbourne itself had three Councillors, Geelong two and a region known as Bourke (directly north and west of Melbourne) had two. The remaining electoral districts, which were rural based, were represented by a single Councillor. Representation favoured rural voters by ensuring that their vote was more valuable than their metropolitan counterparts. The following table provides several prominent examples of this imbalance, which helped entrench rural conservative interests in the first Legislative Council:

The reason for the representative bias in favour of rural constituents was, first and foremost, tied to the prevailing view at the time of the Legislative Council's establishment, that property ownership was closely linked to three of the most important qualities that a Member of a legislature should possess. These virtues' were: education, intelligence and independent means (as Council Members were unpaid).

The original Legislative Council's bias towards landholders, and hence the wealthy, was reinforced by strict eligibility conditions determining membership and voting rights in its elections. Other conditions shaping membership and voting rights related to gender (being male) and age (being at least 21 years of age to vote, and at least 30 years of age to stand for election).

In addition to these factors that helped shape the Legislative Council of 1851 to 1856, was the Governor's right to veto or amend any of its decisions. Due to early teething problems with the quality of representation in the Council, and the complexity of the issues that were faced, the Governor was often forced to use this provision.

Despite this limited form of self-government the first Legislative Council made several significant contributions to parliamentary democracy in Victoria. The most important of these was the drafting of a Constitution which provided a framework for responsible government. This Constitution was officially proclaimed on 23 November 1855 after receiving Royal Assent in Britain. 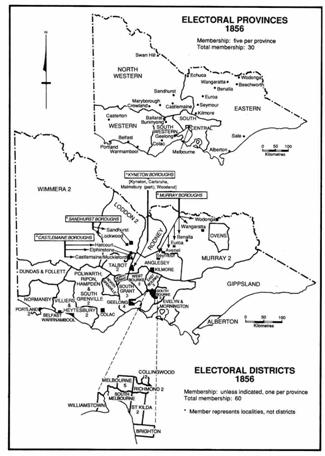 An important electoral initiative, for which the original Legislative Council had been responsible, was the introduction of a secret ballot. Victoria was the first legislature in the world to introduce this method of voting. Although this system had critics who argued that the system was not ‘open' or ‘accountable', those who insisted that a secret ballot contained the virtues of ‘secrecy' and ‘better electoral practice' held sway.

It was decided that the secret ballot would be conducted by providing two rooms at every polling booth. In the first room the voter would have to satisfy an official of their eligible voting status and, in the second, they would cast their vote by crossing off the names of the candidates on the ballot paper they did not support. This system was eventually replaced by a system of placing a cross in a box next to the preferred candidate. Victoria, by introducing the secret ballot, had effectively introduced a voting procedure that is now seen as an integral part of any democratic election. 2

Another factor was that Council Members, unlike their Assembly counterparts, were not paid which meant that only wealthier members of society could afford to sacrifice the time to be a Member of the Council without payment.

Conditions on becoming a Member of the Legislative Council included:

As had occurred in elections for the Council between 1851 to 1856, voter qualifications limited the franchise so that in most cases only property owners, the wealthy and/or the educated were permitted to vote. Restrictions on the right to vote in Council elections included:

Continuing the theme evident between 1851 and 1856 these restrictions reflected the intention of the original framers of the Constitution that the Council be a check on democracy's excesses' by ensuring that its membership was dominated by those considered to have sufficient knowledge and experience to manage Victoria's affairs. It was considered that the essential characteristics of Council Members were that they were mature, wealthy, propertied, educated and (during the nineteenth century) male members of society.

The transition of the Council, from a House with electoral processes dominated by restrictive qualifications to one of universal adult suffrage, was slow by Australian standards. By 1900 no other Australian Upper House had property requirements associated with membership of the legislature, or restrictive conditions on male voters 21 years of age or above, like the ones that existed in Victoria 's Upper House.

The Council used a first past the post' voting system until 1921 when preferential voting was introduced. Victoria's Legislative Assembly had changed to preferential voting in 1911. Debate surrounding the switch to preferential voting in the Legislative Council revolved around whether it was in fact the best system to switch to. Elements within the Victorian Labor Party argued that in practice it was no better than the first past the post system already in place because like that system it did not address issues involving making parliamentary representation more proportional. They argued instead for the adoption of proportional representation. Those arguing for the preferential system in the Council won the day.

The form of preferential voting adopted in Victoria required candidates to obtain an absolute majority (50% plus 1) of the total formal votes cast to be elected. Preferential voting meant that voters could indicate their order of preference of the candidates. If no candidate obtained an absolute majority, after the distribution of the first preference, subsequent preferences would be distributed until a candidate gained the necessary share of the vote.

Voting in Legislative Council elections was not compulsory until 1935 (voting became compulsory in the Legislative Assembly in 1926). Some debate surrounded the adoption of compulsory voting. Those in favour of it argued that it would help alleviate the public's apathetic attitude toward Victorian State politics, whereas its opponents said that it was an infringement against the rights of the individual. Due to the lack of a structured party system in Victoria at the time it is hard to describe this debate in terms of party politics as we now understand them. The debate took place between roughly formed alliances formed across party lines.

An important subsidiary issue to the introduction of compulsory voting in the Legislative Assembly was the decision in 1926 to hold elections on Saturdays for both Houses of the Victorian legislature. This was done for the simple reason that many ordinary' people found it difficult to vote during work hours.

The numbers of Council provinces and Members underwent a series of changes between 1856 and 2003. The first date in Table 2 indicates the year of the enabling legislation; while the date in parentheses is the electoral year from which the legislation applied. Between 1904 and 1907 one legislative councillor represented railway employees and public servants rather than specific electoral provinces. This is demonstrated in Table 2 where it can be seen that in 1907 the number of Members in the Council increased  but the number of provinces did not. By 2003 the Council was comprised of twenty two electoral provinces, with each province represented by two elected Members. Table 2 outlines the way in which these changes to the number of provinces and Members evolved:

Table 2: No. of Provinces/No. of Members