Who is a ‘Private Member’?

Private Members, more commonly referred to as backbenchers, are all Members of Parliament, regardless of party affiliation, who are not Ministers or the President. Private Members play an important, if at times less visible, part in the parliamentary process. The four key areas that normally engage most of a Private Members’ time are: 1. electorate work; 2. legislative work; 3. committee work; and 4. party work. Although sitting days are the most public demonstration of a Private Member’s role, this actually occupies a relatively small proportion of their time.

The Legislative Council is composed of eight electorates, five of which are metropolitan and three rural, with each represented by five Members.

Electorate work involves the Members making themselves available to their constituents and/or other interest groups and delegations to deal with matters of concern or significance. These are often issues at the local or personal level, although they can also involve matters that are more broadly state based. The representational role of Members in their local communities also includes many invitations to attend openings and speak at various functions.

A Private Member is usually a citizen’s most accessible contact with the Parliament and, therefore, the Government. It has been suggested that Members are sometimes treated as the last point a citizen can go to when they face a problem, particularly with a government department. While the Member may not have any specific authority to resolve an issue, their intervention can expedite matters by bringing them directly to the attention of the responsible Ministers.

There are a range of rules and procedures which provide Private Members with opportunities to influence the parliamentary process.  Some of the major ones include:

Any Member may introduce a Bill. A Bill introduced by a Member who is not a Minister is termed a ‘Private Member’s Bill’. Such Bills are introduced from time to time; however, their preparation can prove more difficult due to a lack of departmental support and complexities involved in the drafting of a Bill. In addition, as most Private Member’s Bills are initiated by non-Government Members, the only time to debate such Bills is during General Business on Wednesdays.

The Standing Orders permit Members to make ninety second statements on any topic of concern. Thus, Private Members may use this opportunity to raise issues on behalf of their constituents or to note special achievements made by those they represent. A maximum of 15 speakers are able to speak during Members’ Statements on Tuesday to Thursday.

At the conclusion of sittings, once the motion to adjourn the House has been proposed, Members have three minutes to raise an issue for consideration by Ministers. Members are only able to speak once each sitting day, and may use their allocated time to make a complaint, make a request or pose a query. Rules stipulate that the matter cannot be debated. At the end of these proceedings, the Minister responds to each item raised.

In the Legislative Council, Question Time usually occurs at 2.00 p.m. on Tuesday and midday on Wednesday, Thursday and Friday. Ten questions are asked, usually five by government backbenchers and five from non-government members. The question may cover any topic in relation to the Minister’s portfolio responsibilities. Members may ask a further supplementary question to further clarify the Minister’s answer (For further details, see Information Sheet No. 3 - Questions). 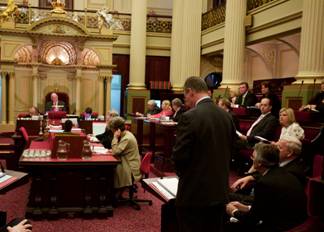 Members may also ask Ministers questions on notice. This involves Members lodging a written question which is published in the Council’s Notice Paper. The questions can relate to any aspect of Victorian Government administration. It is therefore an opportunity for Private Members in one House to scrutinise the actions of a Minister in the other House, and also raise awareness of certain issues. When providing an answer, the Minister responsible will circulate the response to the House and the answer is incorporated into Hansard. If an answer is not provided within thirty days of the question being lodged, nor is an explanation as to why an answer has not been provided, the Member who asked the question can ask the responsible Minister for an explanation at the end of Question Time (For further details, see Information Sheet No. 3 - Questions).

Statements on Reports and Papers

Once a week, one hour is allocated for Members to make a 5 minute statement on any report or paper that has been tabled in the Council in the same Session. This enables Private Members to discuss and draw attention to a specific issue related to the report or paper.

All Members are entitled to speak during second reading debates. This allows Members to contribute to the House's understanding of the Bill in an attempt to influence the acceptance of, or changes to, the Bill. Members can also circulate amendments to Bills during the second reading debate, which are then discussed during the Committee stage (For further details see Legislative Council Information Sheet Number 10 - Bills).

Private Members can also draw the House’s attention to certain issues through the presentation of petitions with a copy of the petition being forwarded to the responsible Minister.  It should be noted, however, that Members often table petitions on behalf of constituents regarding issues with which they do not necessarily agree. 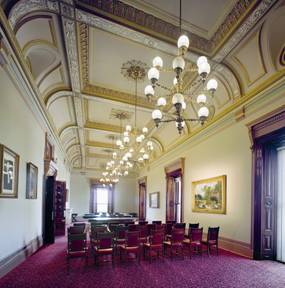 The constraints on parliamentary time and increasing need for specialist knowledge of certain issues has given rise to the development of an expanded committee system. This system permits greater participation by Private Members in policy development and scrutiny of legislation and government processes.

There are different types of committees, such as:

The committee system aims to improve the Parliament’s efficiency by relieving the House of some work. This results in a more thorough investigation of the issue by the Committee, and allows the House greater time to direct to other issues. Overall this results in a greater volume of work being done.

The majority of committee Members, and Chairs, are Private Members. Committee work can be very demanding and time consuming, but at the same time very satisfying as it permits Private Members to investigate, debate and shape the discourse of issues of public interest.

Most Private Members who are representatives of a political party have an obligation to their party organisation.  Although these specific obligations may vary from party to party, there are some common elements, such as attending party meetings, participating in the formulation of party policies and representing the party at various functions and meetings at a constituency level.