Skip to content
You are here: Home > Law Reform > Inquiry into Access by Donor-Conceived People to Information About Donors > Report and Response
Listen

The Inquiry into Access by Donor-Conceived People to Information About Donors is the continuation of an Inquiry begun by the Law Reform Committee in the 56th Parliament. The Committee tabled an

Interim Report (PDF 967.74 Kb) on 15 September 2010, recommending that the Committee continue its inquiry in the 57th Parliament.

On 28 March 2012, the Law Reform Committee tabled its report on the Inquiry into Access by Donor-Conceived People to Information about Donors. The report is 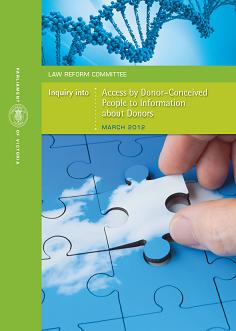 During the course of the Inquiry, the Committee received 77 written submissions, and convened public hearings with 51 witnesses. The report is the culmination of evidence presented to the Committee.

Among the 30 recommendations made in the report is the key recommendation that the Victorian Government introduce legislation to allow all donor-conceived people to obtain identifying information about their donors. To ensure that donors are not unreasonably affected by the release of identifying information about them, the report also recommends that donors have the option of placing a contact veto if they do not wish to be contacted.

The Chair of the Committee, Mr Clem-Newton Brown MP, issued a

Interim Government Response to the report - pdf 63.03 Kb was tabled in Parliament on 11 October 2012.

The Government response was tabled in Parliament on 20 August 2013.