The report was tabled in Parliament on 3 March 2021. Click here to view the report. 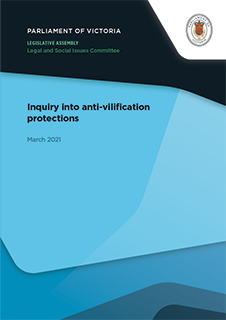 "The Australia/Israel & Jewish Affairs Council (AIJAC) welcomes the report by the Victorian parliamentary committee into the effectiveness of the Racial and Religious Tolerance Act 2001 (RRTA). In particular, AIJAC is pleased that the committee has recommended lowering the legal threshold for incitement-based vilification and comments introducing a harm-based vilification provision to make it easier to substantiate a complaint. AIJAC’s Executive Director Colin Rubenstein said, “At a time of rising racist extremism, the Committee’s review is critically important to ensure that Victoria’s anti-vilification laws become more effective, which in turn helps foster a more harmonious multicultural society.” AIJAC also supports in principle the recommendation to call on the Victorian Government “to establish a criminal offence that prohibits the display of symbols of Nazi ideology, including the Nazi swastika with considered exceptions to the prohibition.” "– Australia/Israel & Jewish Affairs Council media release, 3 March 2021

"The Centre for Excellence in Child and Family Welfare welcomes recommendations made by the Victorian Legislative Assembly’s Legal and Social Issues Committee to extend anti-vilification laws to cover a range of attributes not currently specified in legislation, particularly those that relate to the wellbeing and livelihoods of children and young people. The Centre applauds the Committee for explicitly considering the needs of children and young people and how they are uniquely impacted by vilification. Children deserve to feel safe, supported and cared for at home, at school and in the community. The recommendations reflect the importance of proactively targeting prejudice among all age groups and communities to ensure it does not become further entrenched and systemic.” – Website post by the Centre for Excellence in Child and Family Welfare

“The Islamic Council of Victoria (ICV) welcomes the tabling of the Legal and Social Issues Committee’s ‘Inquiry into anti-vilification protections’ final report. Throughout the inquiry, the Committee received evidence from a diverse range of stakeholders and individual members of the community including the ICV. The report contains 36 recommendations to the Victorian Government including 10 of which have been recognised from the ICV’s submission which we hope will strengthen Victoria’s anti-vilification laws and help to prevent and address vilification in Victoria.” – Islamic Council of Victoria e-newsletter, 4 March 2021

"A diverse group of multicultural, faith-based, LGBTIQ+ and other community organisations have joined together to welcome the recommendations of the Inquiry into Anti-Vilification Protections, tabled earlier today in the Victorian Parliament, but have also warned the Victorian Government that the role of enforcement cannot be left to the victims of hate alone. The Legal and Social Issues Committee’s report recommends expanding protections against vilification to protect people based on gender, disability, sexual orientation, gender identity or expression, sex characteristics, and HIV/AIDS status, in addition to race and religion. Equality Australia, the Human Rights Law Centre, the Victorian Pride Lobby, Jewish Community Council of Victoria, Asylum Seeker Resource Centre, Australian Muslim Women’s Centre for Human Rights and the Asian Australian Alliance are united in their support for the recommendations of the report." - Joint media release, 3 March 2021

"The Online Hate Prevention Institute warmly welcomes the report of the Inquiry into anti-vilification protections which was tabled today in the Victorian Parliament. The Inquiry undertook extensive consultation. Committee members were deeply engaged and worked in a spirit of cooperation to ensure the best possible outcome could be reached for the Victorian community." – Online Hate Prevention Institute media release, 3 March 2021

"Thrilled the Victorian Report of the Inquiry into Anti-Vilification Protections is out today. Some great recommendations. Centrally there's a call to protect all groups of people equally by extending the anti-vilification provisions. This is critical." – Dr James Roffee, Dean, International, Swinburne Law School, tweet, 3 March 2021

"The Victorian Parliament’s inquiry into anti-vilification protection has made recommendations that recognise the harm caused by racial and other kinds of vilification and suggested useful improvements to current laws and systems. ‘We are pleased the Committee has recommended increased protections for Victorians who experience hate speech and the removal of technical barriers that currently make it almost impossible to prove vilification,’ said Melanie Schleiger, Program Manager Equality Law." - Victoria Legal Aid, statement, 3 March 2021

The Committee has received a number of submissions for this inquiry - see the Submissions page for more information. 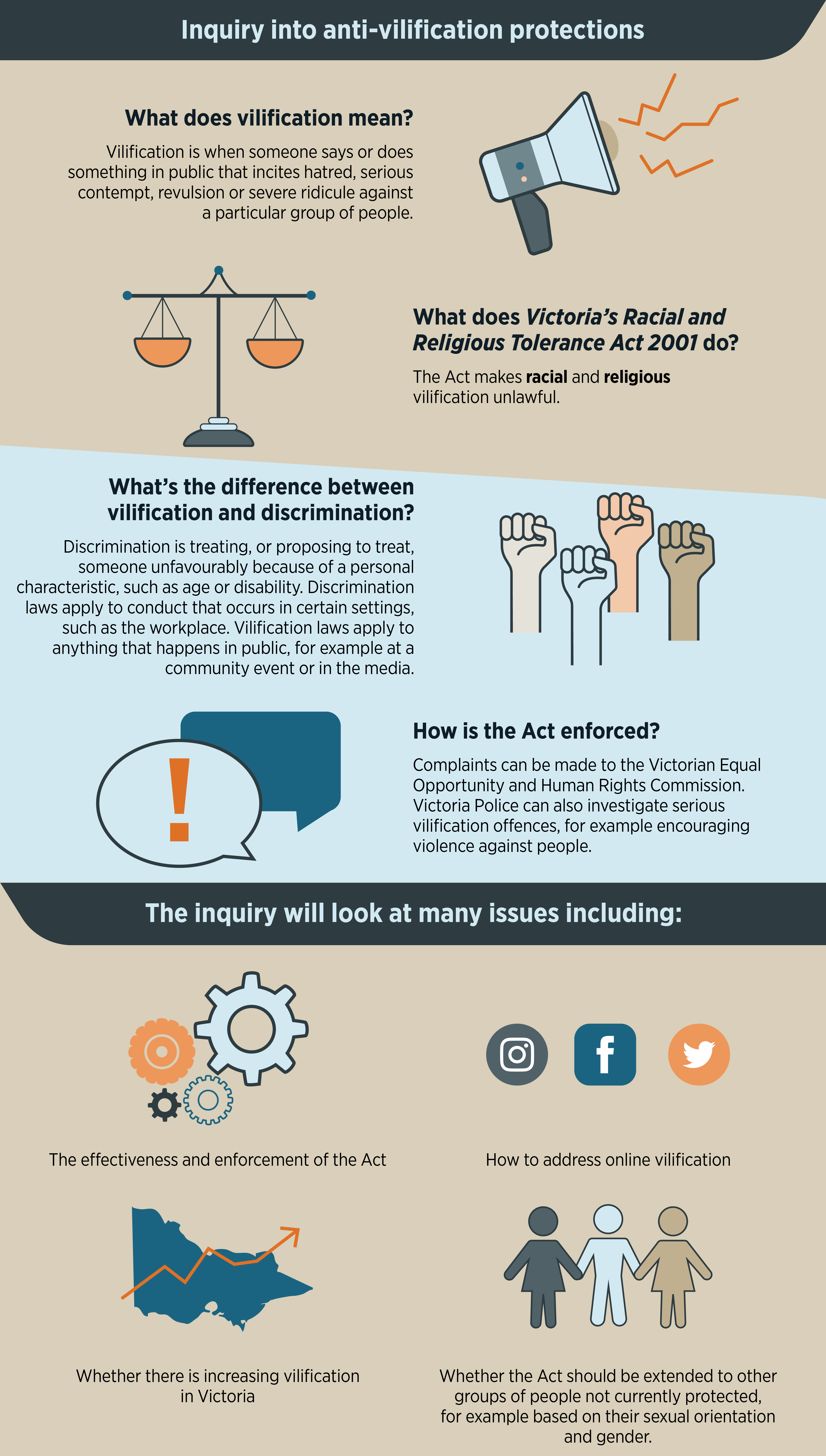