Four Victorian parliamentary advisers are travelling to Suva to provide assistance to the new Fiji Parliament as it enters its first full year of operation after historic elections last year.

The Victorian team will include specialists in parliamentary procedure and practice as well as senior staff responsible for human resources and community engagement.

The attachments are in response to a request from the Fiji Parliament and follow on from assistance provided last year in the lead-up to and immediately following the re-establishment of the parliament.

The Victorian advisers will work with their Fijian counterparts on developing procedures and systems to support the sittings of the parliament.

They will also work on a human resources needs assessment to help guide the future development of the Fijian parliamentary secretariat and assist with the preparation of a community engagement strategy for the parliament to help inform the Fijian community about parliament’s work and build community connections.

The attachments will involve training and mentoring of Fijian parliamentary staff, many of whom have not worked in a parliament previously.

It’s part of an international project to provide capacity building for the Fiji Parliament during the first important years following the return to democracy. The project is being coordinated by the United Nations Development Programme.

Australia is contributing to the project through its Pacific Parliamentary Partnerships program, funded by the Department of Foreign Affairs and Trade and the Centre for Democratic Institutions at the Australian National University.

Pacific Parliamentary Partnerships is a joint initiative of Australia’s state, territory and federal parliaments and connects 23 Australian and Pacific parliaments through twinning arrangements in support of democratic development in the region. 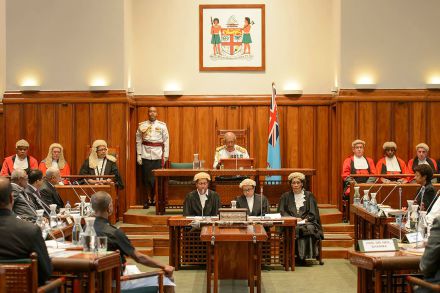 Opening of the Fiji Parliament in October 2014