An historic agreement has been signed between the Fiji and Victorian Parliaments during a visit to Melbourne by a parliamentary delegation from Fiji.

The Parliamentary Partnership Agreement was signed by the Presiding Officers of the Victorian Parliament, Bruce Atkinson and Telmo Languiller, and the Speaker of the Fiji Parliament, Dr Jiko Luveni, who led the delegation’s visit to Australia. 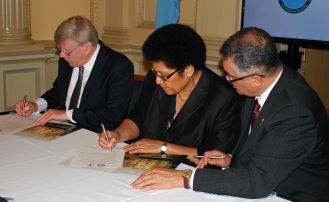 Signing of the Parliamentary Partnership Agreement between Fiji and Victoria

The twinning agreement provides for exchanges of information, training activities and exchanges of visits between the two parliaments to help with the professional development of parliamentarians and parliamentary staff.

During the visit to Melbourne the Fiji delegation met with their Victorian counterparts to find out more about parliamentary processes and constituency relations. 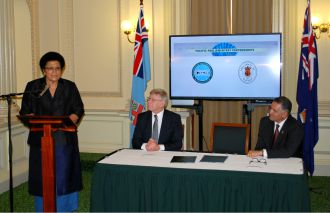 The delegation is also visiting the electorate office of the Member for Forest Hill, Neil Angus, and observing a parliamentary education program at Laburnum Primary School.

The Fiji Parliament is developing its community engagement programs and delegation members were keen to learn from Victoria’s experience with community outreach activities.

Victoria has been providing assistance to the new Fiji Parliament with Victorian MPs and parliamentary staff participating in training programs and attachments to Suva to provide capacity building under the Pacific Parliamentary Partnerships program.

The program is supported by funding from the Department of Foreign Affairs and Trade and the Centre for Democratic Institutions. 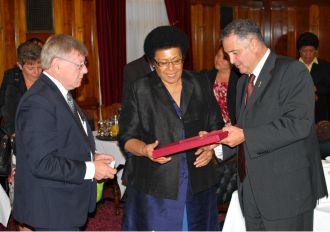 Exchange of gifts to celebrate the parliamentary partnership