Thirty-four students from three Victorian universities have been selected for internships at the Victorian Parliament in 2015.

Celebrating its 25th anniversary this year, the parliamentary internship program provides each student with the opportunity to prepare a research report on a topic that is chosen in consultation with a Member of Parliament. 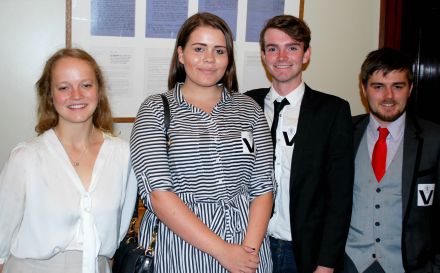 Parliamentary interns for 2015 (l to r): Claudia Weatherall, Elizabeth Kuiper and Harvey Duckett from University of Melbourne and Aidan Johnson from Monash University

To commence this year’s program, students have attended an orientation session at Parliament House at which they were paired with MPs.

One of the new interns, Ellie Wyatt, who is studying Arts Law at Monash University, said the program was a very good opportunity to get immersed in the political sphere and at the same time develop her skills in research.

She said the program was like undertaking a small Honours thesis and would allow her to make new contacts, show initiative and develop her independence.

Former intern Tom Hvala, who is helping to coordinate this year’s program, said his time at Parliament House had helped him to gain a different perspective on issues.

He said the program enhanced his undergraduate experience by allowing him to prepare a detailed and thorough report on an issue of relevance to the broader community. He was able to interview and discuss issues with key stakeholders, which is not something usually available to undergraduate students.

Coordinated by the Victorian Parliamentary Library, the internship program is conducted jointly with the University of Melbourne, Monash University and Victoria University.

To celebrate the 25th anniversary of the program an alumni has been formed to reunite people who have participated in the program and to recognise their achievements. For more information visit the internship program webpage.