Skip to content
You are here: Home > About Parliament > News > 164 years of separation
Listen

That momentous event has been recognised in the Victorian Parliament by Speaker Telmo Languiller, who acknowledged the164th anniversary of separation in a statement to the Legislative Assembly.

Separation came at a crucial time, the Speaker said.

The Speaker acknowledged members of the Victoria Day Council in the public gallery during his statement to the Assembly. He thanked them for working tirelessly over the past 20 years to help maintain Victoria’s rich heritage.

The Speaker also noted that he and the President of the Legislative Council had planted in the Parliament House gardens a sapling grown from the seed of Victoria’s historic Separation Tree. In November 1850 Melburnians had gathered at that tree to celebrate the announcement that Victoria would separate from New South Wales.

“May the Separation Tree sapling that now grows in the Parliament House gardens be a living tribute to our heritage and grow big and strong along with our state,” the Speaker said. 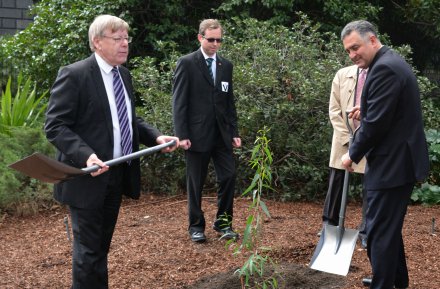