Nelson Mandela Day has been recognised in the Victorian Parliament.

Speaker Telmo Languiller has made a statement in the Legislative Assembly acknowledging the achievements of Nelson Mandela and the importance of the day.

“Our parliament was in recess when the day was celebrated on 18 July, the birthday of Nelson Mandela,” the Speaker said.

“So today I wish to acknowledge the anniversary of his birth and the significance of the day for so many people around the world, but particularly for people living on the African continent.” 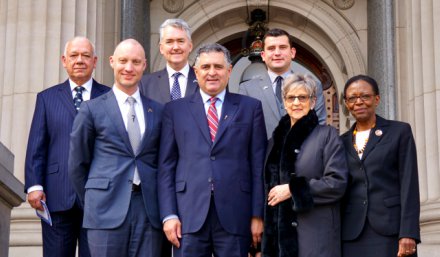 Nelson Mandela Day was officially declared an international day by the United Nations in 2009.

“By celebrating that day, the world community recognises what Nelson Mandela was able to achieve through a lifetime of struggle and hope,” Mr Languiller said.

“At the same time, we honour his memory through a shared commitment to fight poverty and to promote peace, reconciliation and cultural diversity.

“At times those ideals can seem impossible to achieve. But let us remember those words of Nelson Mandela: ‘It always seems impossible until it is done’.”