Victoria’s Parliament House will be lit up blue on Saturday 24 October for the 70th anniversary of the United Nations.

It’s part of global celebrations that will see landmarks around Melbourne and across the world turn blue, including the Great Pyramid of Giza in Egypt, the Empire State Building in New York and the Statue of Christ the Redeemer in Brazil. 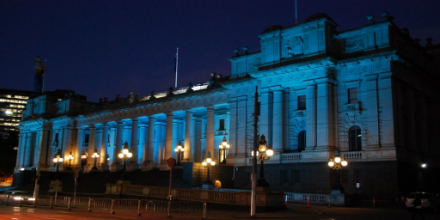 “This Saturday 24 October the world unites to celebrate the 70th anniversary of the United Nations,” Speaker Telmo Languiller told the Legislative Assembly.

“On this historic day, Parliament House will be illuminated in a blue light, symbolising the official colour of the United Nations.”

The Speaker said the work of the United Nations is needed as much today as it was in 1945.

“It delivers humanitarian assistance to 90 million people. It vaccinates 58 per cent of the world’s children. It provides 120,000 peacekeepers across the globe,” he said.

“As it has throughout its history, the United Nations seeks solutions to problems that require global cooperation.”

Mr Languiller praised those Australians who have worn UN blue in the service of the world.

He also paid tribute to Australian politician Dr Herbert Evatt, who was the third President of the United Nations General Assembly from 1948-1949, played a critical role in drafting the Universal Declaration of Human Rights and was the first Chairman of the United Nations Atomic Energy Commission.

“This United Nations Day, I encourage members and their communities to spread images of Melbourne’s landmarks in blue across the world on social media, so that we connect with the global celebrations,” the Speaker said. 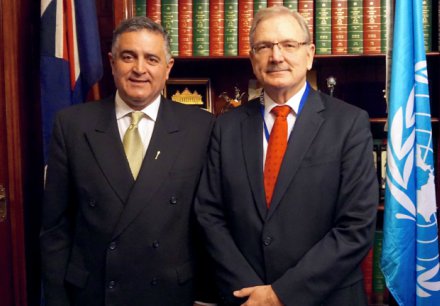 Speaker Telmo Languiller with John Richardson, Victorian State Director of the Department of Foreign Affairs and Trade, who was a special guest for the Speaker's statement to the Legislative Assembly on the United Nations 70th anniversary