A Lone Pine sapling has been planted at Parliament House to commemorate the Centenary of Anzac.

The sapling was planted by the Victorian Parliament’s Presiding Officers, assisted by the Member for Broadmeadows, Frank McGuire, who arranged for the sapling to be provided to the parliament. 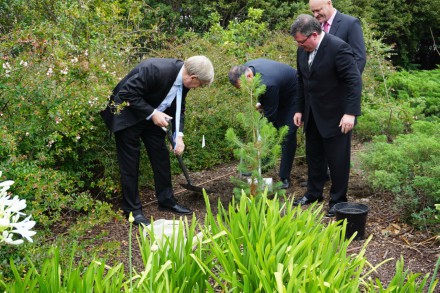 The Turkish Consul-General, Mr Mehmet Kucuksakalli was a special guest at the ceremony, which was attended by a number of parliamentarians and parliamentary staff.

“We are very honoured on behalf of all members to be able to commemorate this unique event at the Victorian Parliament,” said Speaker of the Legislative Assembly, Telmo Languiller when welcoming guests to the ceremony.

“The Lone Pine is such a significant tree,” said President of the Legislative Council, Bruce Atkinson.

“It has stood majestically in Turkey overlooking the trenches of World War I.” 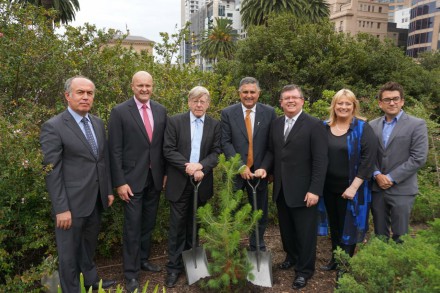 A unique ceremony to commemorate the Anzac Centenary

Frank McGuire said for the Centenary of Anzac it was important to bring something from the community that members represent to the parliament that represents the state.

He noted that the army barracks in Broadmeadows from which troops went to fight in Turkey eventually became a migrant hostel at which Turkish immigrants began a new life in Australia.

Carrying a photo of soldiers training at the barracks, Mr McGuire highlighted the friendship that now exists between the peoples of Turkey and Australia.

“To honour the way we have evolved and developed as nations, and the friendship between our peoples, I thought it was appropriate to make this gift,” he said.

“It marks the ebb and flow of history.”