Skip to content
You are here: Home > About Parliament > News > Sittings start with Acknowledgment of Country
Listen

Sittings start with Acknowledgment of Country

The new sitting year has started with a new tradition in the Legislative Assembly that recognises and pays respect to a traditional ceremony of Aboriginal peoples.

From today, at the start of each sitting week, the Speaker will give an Acknowledgment of Country.

Aboriginal Elders and community members were special guests in the Legislative Assembly chamber today for the first time that this tradition has been included in the Assembly’s sitting protocols.

“We acknowledge the Traditional Aboriginal Owners of the land on which we are meeting,” Speaker Telmo Languiller said.

“We pay our respects to them, their culture, their Elders past, present and future, and Elders from other communities who may be here today."

“We recognise the Elders, community members and representatives from the Victorian Aboriginal Heritage Council, Federation of Victorian Traditional Owner Corporations and Native Title Services Victoria who are seated in the lower gallery today, witnessing this historic occasion,” the Speaker said.

The Acknowledgment of Country was introduced following a unanimous resolution of the Legislative Assembly last year.

It follows the decision in September to fly the Australian Aboriginal Flag permanently on the top of Parliament House, alongside the Australian and Victorian Flags.

Previously a Welcome to Country ceremony has been included in the ceremonies for the Opening of Parliament and towards the end of last year an Acknowledgment of Country was included as part of procedures for the start of Legislative Council sittings. 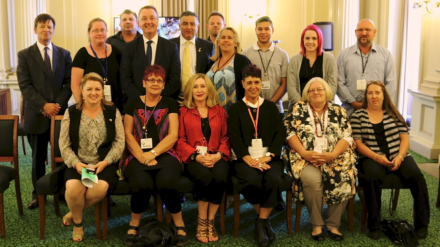