Skip to content
You are here: Home > About Parliament > News > First report from IBAC Committee
Listen

The Independent Broad-based Anti-corruption Commission Committee has presented its first report to the Victorian Parliament.

The Bill proposes a number of reforms to anti-corruption and integrity agencies within Victoria, including the Independent Broad-based Anti-corruption Commission and the Victorian Inspectorate, which the Committee oversees.

“This report examines the Bill and considers whether the proposed legislation addresses issues that have been raised about the operation of Victoria’s integrity system particularly the IBAC and VI,” said Committee Chair Kim Wells MP.

“The Committee found the Bill does address many of the concerns raised by interested parties,” he said.

“However, we have also received evidence that highlights ways in which the system could be further improved.”

The Committee has made 13 recommendations for consideration during the Government’s ongoing review process, to take place throughout 2016-2017.

It has also identified a number of areas which it intends to investigate further over the next year. They include: 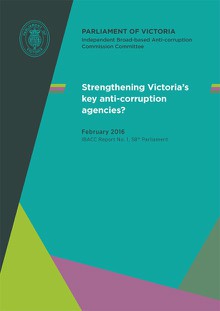