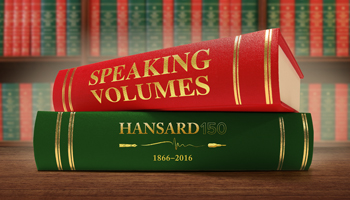 View our feature: 'Speaking volumes'
In this anniversary year, take a look at the work of our Hansard team, as they prepare the next chapter in our Parliament's history.

Victoria's Hansard service was established in 1866 and has grown from a staff of three to almost fifty.

In our feature, meet members of the team and explore the many changes that have occurred in the process of reporting on proceedings from the Houses of Parliament.